If you were to ask him, Mr Cat would inform you that he is a sleek and sinuous red tabby (he despises the term “ginger tom”); he would also discreetly gloss over the fact that he is somewhat overweight and sheds profusely, but then, we all have our little vanities. At the time of our story, Mr Cat is living with a couple he used to call the two legs (more on this later) – one male and one female. He devoutly hopes that it stays this way. Having had to fend for himself in his youth, he fully appreciates regular meals and a clean litter box, and he will also admit to enjoying the brushing and cuddles supplied by his two-legs on a slightly less regular basis.

When Mr Cat first came to live with his two-legs, he was in a rather delicate condition. While living in the outside world, (the cause of this is another story, which he still finds painful to relate) he had been captured, incarcerated, deprived of his male parts by a group of well meaning two-legs (they fed him), and placed in a cage in a room full of other caged felines. Fortunately, his own, personal two-legs had appeared one day shortly after, and had taken him home in yet another cage – this one made of plastic.

In his new home, Mr Cat had been fed, bathed (UGH!), and generally pampered until he reached the magnificent proportions of his present state. There was only one small problem with this arrangement – he was sometimes bored and lonely. You see, his two legs disappeared five days out of seven for about nine hours at a time. There was no-one to talk to, or to play with; they didn't even have any mice to chase.

At one point in this history, his two legs had left entirely, for a whole week. The mother of the male two-legs had replaced them as his caretaker, but, although she was kind, and attentive, it just wasn't the same and, unfortunately, she brought with her a female canine, a tiny little dog, who raced around the house, and barked more than was necessary, even for a dog. Mr Cat tried to make friends (after establishing his territorial rights), but every time he approached the silly creature, she ran to her mistress, barking to be picked up. This was highly annoying because Mr Cat wanted the two-legs to pick him up instead of the dog, so he succumbed to bullying the animal. This was his house, after all, and the dog was about half his size.

This bullying took the form of chasing the dog from any room that she chose to enter without the two-legs. This game continued for a couple of days until Mr Cat committed a tactical error. He approached the two-legs, who was making something out of yarn while sitting on the couch. The dog was snuggled up to her, and Mr Cat wanted to join in. Well! No sooner had he leaped onto the couch, than the tiny, formerly timid canine jumped up and started barking ferociously—“the house may be yours, but the human is MINE!!” Human? Is that what the two-legs called themselves, or just this odd little dog? Then Mr Cat ran away with the dog in hot pursuit. He escaped through the cat door, and hid ignominiously in the room where they kept his litter box. The dog wouldn't follow him there.

Thinking over this new situation, he realized that he would have to call a truce if he wanted a share of the attention of the new two-legs. Later, after things had calmed down, Mr Cat sidled (no stalking) up to the dog (her name was Honey, he knew), and attempted to make friends (again). This time, he took nothing for granted; this time, he didn't just assume that the dog would want to be his friend. This time, he approached the situation carefully, delicately. After a couple of days of eating humble pie (for a dog, for heaven's sake!), peace reigned, and the dog shared the two-legs.

Then, oh joy, his own two-legs returned and the female with the dog left. It was lovely to be the centre of attention again, when his two-legs were there, but they took up the same old pattern of leaving for hours at a time most days of the week. Again, he was much loved, but lonely. He wanted some company during the day.

Molly is an ocicat. With Siamese, Abyssinian, and silver tabby ancestors, she is a large, spotted, beautiful, green-eyed creature. Her flexibility and silent movement are a pleasure to behold. Her wild looks are completely misleading, however; like all ocicats, she has the soul of a dog within the body of a cat. As a youngster, she too had been sent to the humane society for reasons unknown. Then, a few days after she had been left in the cat room, a pair of humans had arrived, and chosen her to take home with them.

At first, this home had proven somewhat problematic. It contained a large, ginger tomcat with a highly developed sense of ownership and of his own importance within the scheme of things. Hmm... this could not be allowed to continue; her Siamese ancestors alone would not permit this to happen.

For the first few days in her new home Molly and Mr Cat avoided each other as much as possible. Oh, there was the occasional skirmish near the food bowls and the cat cushions in the master bedroom, but in general, it was fairly peaceful. After a while, Molly learned that Mr Cat was mostly bluff—he didn't use his claws in their wrestling matches, and if she ignored him, he came looking for attention. She soon became the dominant partner, as she had intended, and as long as she didn't rub his nose in it, Mr Cat accepted the situation. Existence became quite enjoyable.

Their daily life soon settled into a comfortable routine for Mr Cat and Molly, with daily food and grooming being the highlights. On weekends, there was generally extra attention, but even when the humans—yes they were called humans, not two legs—weren't present they always had each other for friendly wrestling matches and mutual grooming. Of course Molly took her job as a watch cat a little more seriously than Mr Cat, but that was to be expected given her ancestors. She toured the whole house every day, and sometimes could be found sitting atop the refrigerator surveying her domain below. She usually didn't maintain this pose for long, if her companion wanted to play, however. This was about to change.

The trouble started when they all moved to a new home. Both Mr Cat and Molly were relieved to find that they didn't lose their humans in this move, but it was still a change in their lives and cats hate change. At first, both cats blamed their sense of unease on the fact that they were in different surroundings, but the unease continued, even after they became familiar with the new locations of the food bowls and the litter box. There was something strange about this new home, although new would be a misleading description because the house was much older than the cats; they could tell. It might even be older than their humans. It wasn't the oldness that bothered them, however. What bothered them was that there seemed to be something other than the cats and humans living in the house with them, but it didn't declare itself as good manners required.

As you may know, all cats possess a sixth sense which detects beings that are not noticed by most humans. Centuries before, cats and these other creatures had developed a code of behaviour for dealing with each other that didn't offend either side, and that also didn't upset any humans present. Cats didn't have to learn this code, it had become instinctive, like hunting mice, and the only time that they broke it was when the new entity was a threat to their humans. The being in this new house seemed to be hidden from them. It was there alright, but they didn't know what it was because it wouldn't show itself.  ........................


And here are the two characters the story was built around....

Photographs by their daddy. 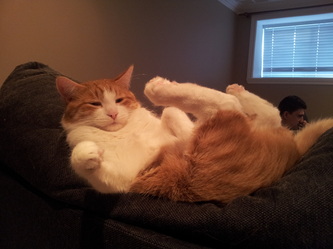 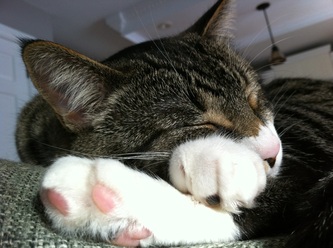 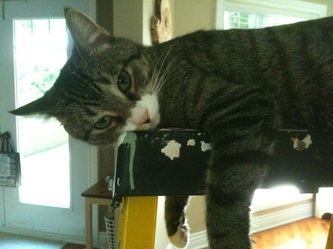 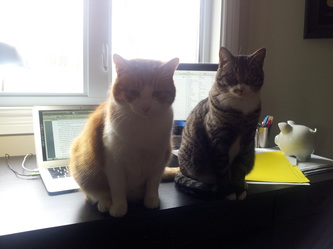 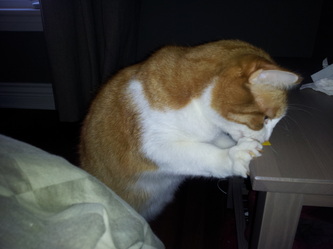 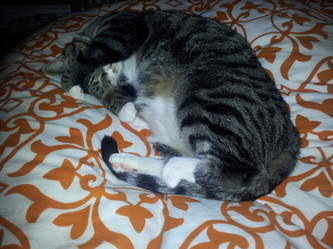 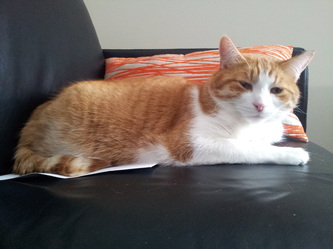 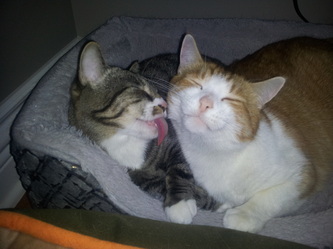